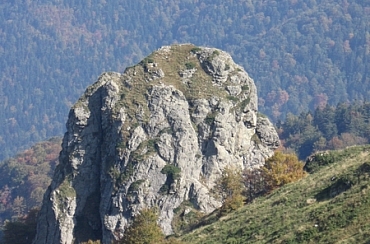 ABOUT KUPATA Kupata, also called Kralimarkova Kupa (hay stack) after the legendary hero Krali Marko, is a rock phenomenon, occurring in the in the region of the site of Krivinite – located on the summer trail from the Pleven hut to the peak of Botev, after the trail fork to Mlechniya Chal to the saddle of the Botev shelter. The trail passes a spring and a stone pan, located on small pasture called Pestta (the oven). After this two steep avalanche furrows are crossed and the Kupata is reached – it is called like this because it is believed to be the petrified stack o heap of the legendary Krali Marko. Address: Stara planina mountain