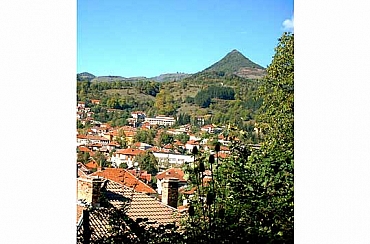 ABOUT MOUNTAIN PEAK OSTRICH Mountain peak Ostrich is the most curious of the peaks surrounding the town of Teteven. It is 1069 m high. It can be distinguished from the other peaks for its conical shape, which resembles a volcanic cone.
It is in fact the shape that originates the belief, according to which old man Dadashko had a dream, in which he saw a volcano erupting from the peak. He shared that with the priest. The priest suggested that he held a service on the mountain peak in order to appease all evil and protect the town of Teteven. He also proposed that stones from the Vit River were carried on the mountain and used to press down the evil monster. Since then in the beginning of October every year the old women from Teteven start for the peak. Every one of them carries a river stone. For more than 70 years the believers from Teteven honored that superstition.
Address: Teteven Balkan