The closing session of the Summer University under the UNESCO program "Man and the Biosphere" was held at the Information and Cultural Center of Troyan on the 26th of July. The event was opened with a greeting from the deputy Mayor of Troyan municipality - Bistra Cholakova. Mrs. Cholakova told everyone present about the history of the Municipality of Troyan, demonstrating the long-standing connection between preserved nature, preserved crafts and Bulgarian traditions in the region. She emphasized that it is precisely the combination of these components that is the essence of the biosphere parks and expressed her pride that the municipality of Troyan is one of the hosts of the UNESCO Summer University.
The Director of NP Central Balkan, Executive Director of BBF Rumyana Ivanova, prof. Michael Scoullos from the Greek National Committee of Man and the Biosphere Program of UNESCO, lecturers, particpants and local stakeholders were also present at the event. At the closing session the young experts from 15 countries presented their recommendations and proposals for future projects and initiatives at local and international level. They were summarized by the group work, which were carried out the previous days in the following groups: Large-scale joint communication projects promoting the MAB programme (locally and internationally); Connecting and involving young people into the MAB network; Enhancement of local products and tourist services for the sustainable development of the territory; Education for Sustainable Development projects within BRs. Some of the most interesting proposals were: establishment of International Youth committee for biosphere reserves; producing of integrated map of the tourist potential and the opportunities, which offer BRs in Bulgaria; education of tourist sector of the possibilities for tourism in the BR Central Balkan and etc. It was discussed also implementing of a common trade mark of BR Central Balkan, which includes not only the tourist attractions but also local products, crafts and traditional productions in the region. All the proposals will be presented also to the Mayors of Municipalities, part from the BR Central Balkan as well as the Direction of NP Central Balkan.
At the end of the discussion the representative of the Greek National Committee of Man and the Biosphere Program of UNESCO prof. Michael Scoullos made an appeal towards the deputy mayor of Troyan Municipality and the Director of NP Central Balkan to do their best to inform and invlove in the discussions of the future of BR all the stakeholders of the region – local people, local business, institutions, tourist, NGO organisations and etc. To make them work together for the sustainable developments of the region and to be proud that they belong to the family of BRs and the trade mark, which brings recognition and popularity all over the world. Summer Univeristy of MAB program of UNESCO is an International initiative of the  Regional Bureau for Europe, based in Venice (BRESCHE), which aims to attract and train young specialists from all over the world on topics related to the development of biosphere reserves. Its fifth edition is happening in Bulgaria, in the southern and northern part of Central Balkan Biopshere Reserve at the territories of Karlovo, Pavel Banya and Troyan Municipalities.   For almost a week the participants were able to get acquainted with nature, cultural and tourist treasures of BR Central Balkan. Their program beside theory part includes also practical activities like: visiting of “At the Foot of the Balkan Mountain” Farm in Vasil Levski village and “Rosino Organic Farm” in Rosino village. Visit of tourist attractions Lift Sopot, Bjala Reka eco-trail, complex “Damascena”, eco-hotels and guest houses and etc. Participalnts attended demonstrations of rose-oil and wine production. They also tasted delicious wine, local products and the green cheese from Cherni vit village. Enjoyed a Bulgarian authentic folklore, presented by the ensemble of the "Vasil Levski" 1861National Chitalishte, Karlovo and learn more about the history of Karlovo and Troyan. Summer biosphere educational adventure will continue by 28th of July with visit of Troyan Monastery and National Exhibition of Crafts and Arts in Oreshak. The participants will present also lectures on the topics: Festivals as a promotional tool for attracting tourists and Capitalizing the natural benefits of BRs - economic aspects of business plans. Main organiser is Bulgarian Biodiversity Foundation with the support of the Central Balkan Biosphere Reserve, UNESCO Regional Bureau of Science and Culture in Europe, Ministry of Environment and Water of the Republic of Bulgaria, Mediterranean Information Office for Environment, Culture and Sustainable Development, UNESCO Chair and Network on Sustainable Development Management and Education in the Mediterranean of the University of Athens, Karlovo and Troyan Municipalities, Permanent Representation of UNESCO in Bulgaria, local organic pharms, winery, hotels, which are hosts and sponsors of the events in the region.  Other partners: Chateau Copsa, Karlovo, Rozino Organic Farm and Gelatto and Latte, Lift Sopot, Hotel Casa Art, Oreshak, Troyan, National Exhibition of Crafts and Arts in Oreshak, “Edinenie” (Unity) project 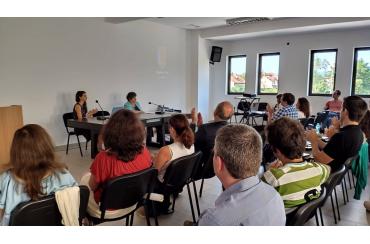 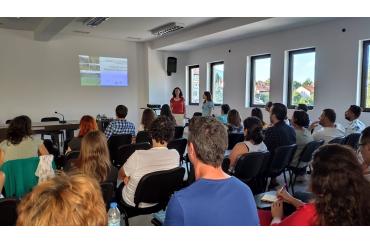