We take the opportunity that Bulgaria is hosting the fifth edition of one of the major UNESCO initiatives, such as the Summer University on Integrated Management and Sustainable Development of Biosphere Parks, to introduce you to other similar territories in Bulgaria and around the world.

The Uzunbudzak Biosphere Reserve covers a considerable part of the Strandja Mountain (over 78,400 ha). It is one of the most interesting and rich biodiversity regions in Bulgaria and Europe. Its territory is a natural transition between the vegetation, flora and fauna of Europe and Asia because of the terrestrial connection that existed until about 7,500 years ago at the site of the present-day Bosphorus Strait. The flora of the biosphere reserve is characterized by a large number of species that were widespread during the Tertiary (Tertiary relics). The wildlife is also remarkable for its great diversity of species. The populations of many of them are of global, European and national importance.
On the territory of the municipality of Malko Turnovo numerous mound necropolises and separate tombs have been discovered. The Thracian stone tombs, known as dolmens, are scattered all over Strandzha. Studies show a buildup of tracks from different eras. Complexes of dolmens near the villages of Zabernovo and Evrenozovo continue to function as "cities of the dead" during the Hellenistic and Roman eras. From the Middle Ages dates from one of the most interesting Christian monasteries from the time of Hesychasm, built in a cave - the monastery "St. Trinity "in the village of Gramatikovo. There are remains of medieval monasteries near the villages of Kalovo and Zabernovo.
In 2009, Nestinarstvo (a ritual associated with dancing on fire)  was included in the UNESCO List of Intangible Cultural Heritage. It is an ancient Bulgarian and Greek custom, which is performed on the day of St. St. Constantine and Helen from the so-called "Nestinari". They dance barefoot on a ember with a Christian icon in their hands, fall into a trance and predict the future. The custom is one of the examples of reconciling Christianity with ancient pagan customs. Nestinarstvo is found only in this part of Bulgaria and in some parts of Greece, and its roots are associated with the Dionysian holidays. 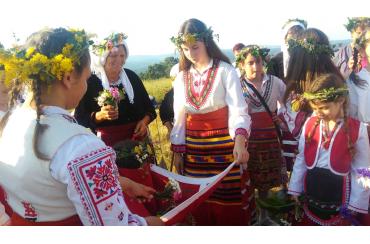 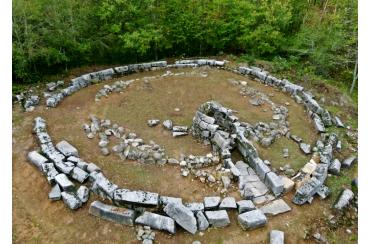