ABOUT MOUNTAIN PEAK PETRAHILYA Mountain peak Petrahilya is a symbol of the town of Teteven. It is 1179 m high. Its stone ridge, which is 130 m in height, is firs to meet the warm sun beams in the morning. That is where the name of the peak derives from. Petrahilya – from Greek “petros” – stone and “helios” – sun. Petrahilya means Sun Stone. With some appropriate illumination one can see peculiar signs and marks of significant size on the rock. Some say those represent letters, others claim that they see a distaff with a spindle.
There are some legends about mountain peak Petrahilya. According to one of them a handsome young man, Dimo by name, courted the beautiful girl Tsvyata. He would play his wooden flute for her and she would listen to him in enchantment. Every time she went on a date with him Tsvyata would put on in her prettiest dress. To test how courageous Dimo was Tsvyata promised to marry him if he climbed the Petrahilya peak and stuck her distaff in the very rock. Dimo did as Tsvyata said. He climbed the Petrahilya peak. Descended down a rope and reached the rock where he stuck the distaff. Unfortunately the rope tore off and the young man fell into the abyss underneath him. The distaff stayed there to remind of the bet of the two lovers. At night when the wind howls over the Petrahilya peak it sings for the perished young man Dimo.
Address: Teteven Balkan 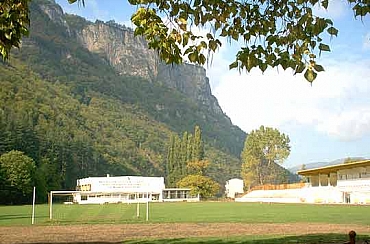