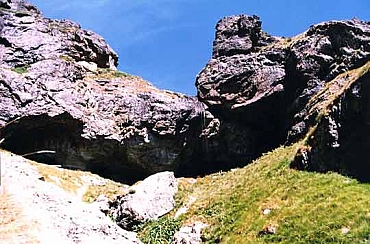 ABOUT NOVOSELSKI SKALI Novoselski Skali are located on the territory of Severen Dzhendem Reserve. It is named after the name of the village of Novo Selo, which together with the villages of Vidima and Ostrets made Apriltsi town in 1976. This rock cliff is the most significant element of the incredible beauty of the mountain landscape in this region. It is especially impressive with its inaccessibility and makes a certain interest for the rock climbers. Not only the rock, but their feet are inaccessible. Therefore and because the site is on the territory of a reserve the sports events are rarity. From the scientific point of view the site represents the largest natural disclosure of the granites, composing the Botev Peak Intrusion, which with its length of some 30 km (from the peak of Dobrila to the peaks of Triglav and Peeshti Skali) and its width of 1 to 7-8 km is unique for Bulgaria. Address: Reserve North Djendem